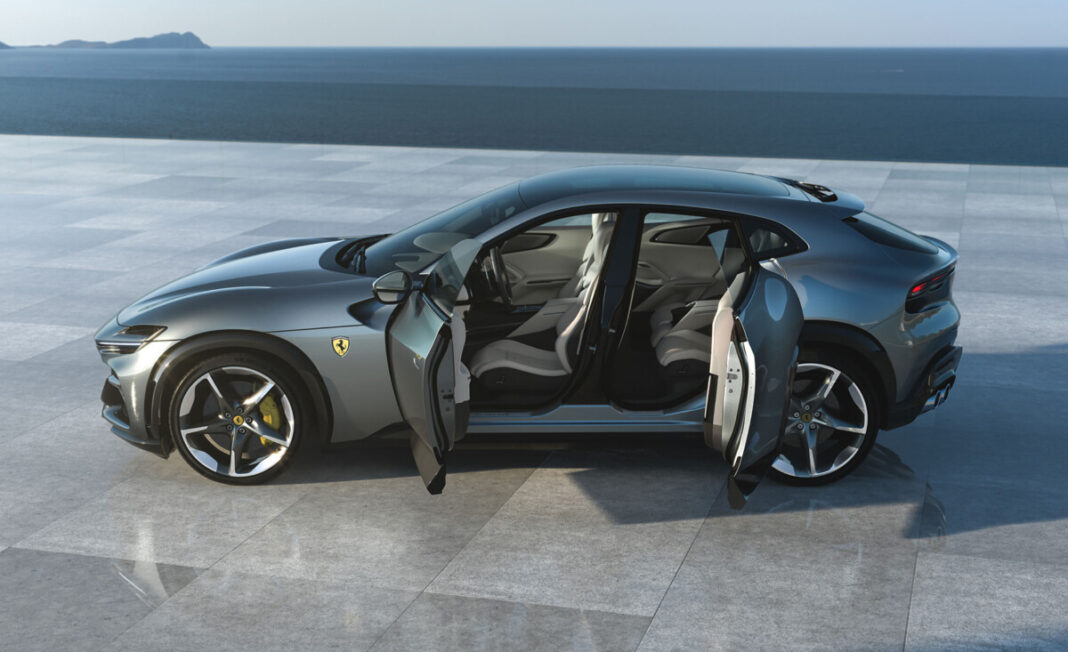 The Ferrari Purosangue is the first ever four-door, four-seater car in Ferrari’s history, but models with two rear seats have played a significant role in the company’s strategy since the very beginning. Now, in the culmination of 75 years of leading-edge research, Ferrari has created a unique car and the encapsulation of the Prancing Horse’s DNA, where performance, driving pleasure and comfort coexist in perfect harmony. And that’s why this new model was called Ferrari Purosangue – Italian for thoroughbred.

The all-new chassis with carbon-fibre roof is characterised by rear-hinged back doors to make ingress and egress easier while keeping the car as compact as possible. The cabin has four generous heated electric seats that will comfortably accommodate four adults. The boot is the largest ever seen on a Ferrari and the rear seats fold for even more space. The Ferrari Purosangue has a more commanding driving position than other Ferraris, but the configuration is the same as on every other Ferrari. As a result, the ergonomic driving position is still intimate to provide greater connection to the car’s dynamic capabilities.

The Ferrari Purosangue has created a new segment in which the Prancing Horse opens unprecedented new frontiers. Thanks to its modern architecture, the Purosangue is a versatile car that melds unparalleled comfort with Ferrari’s signature performance and driving pleasure. The Ferrari Purosangue (meaning thoroughbred) name beautifully describes the car’s architecture. Its sleek, athletic exterior sets it apart from other four-door, four-seater cars on the market and combines with a sublimely comfortable, luxuriously roomy and impeccably appointed cabin. This is not just an incredibly fast, agile car but it also offers the space on board to ensure exceptional comfort for all four occupants.

The Ferrari Purosangue doesn’t have a front grille – this has been replaced by a dihedral suspended on the lower section. Two shells create a disc form with a slot that houses the camera and parking sensors, so that they are integrated seamlessly into the car’s shape. At each side of the bonnet are the DLRs which are set between two pairs of air intakes which meld into the upper part of the flanks, underscoring the styling theme.

The aerobridge theme characterises the flanks as the form runs along the side, creating a dihedral shape which ends in the imposing rear muscle. The wheel arch trim treatment reveals the Ferrari Purosangue bodywork’s second layer: the functional and technical elements become a lower visual element and this creates the impression of coupé proportions. When the front and rear doors are opened together, the interior seems much bigger than imagined when they are closed, thanks to the meticulous work lavished on keeping the roof and greenhouse area compact.

The rear muscles dive into the tail where a horizontal cut line incorporates the taillights at its tips. Beneath the latter, two scoops converge into two vents. An imposing diffuser and the large rear wings combine to make the tail look impressively wide with the sporty cabin sitting low over this volume.

The cabin looks and feels like an extremely elegant, sporty lounge: when the doors are opened, a surprisingly generous space is revealed. Equally surprising is the sophisticated luxury of the interior which exudes a sense of both elegance and modernity. Modern design languages harmoniously combine with Ferrari’s signature GT sports car aesthetic. All of the forms are deliberately compact to optimise both the available space and its ergonomics.

The feeling of emotional engagement for the front passenger is guaranteed by the dual-cockpit architecture and the 10.25″ display that provides all the information required to help them participate in the driving experience. The Ferrari Purosangue features the entirely digital interface already adopted for the rest of the range. The dual cockpit concept was then extended and replicated in the back of the car, creating four areas that are quite distinct in terms of their functionality, volumes, materials and colours.

For the first time in Ferrari history, the cabin has four separate and independently adjustable seats. The integration of comfort-focused components, the use of variable density foams, and the new suspension system mean that the Ferrari Purosangue delivers unprecedented occupant comfort and a layout that exudes the sportiness and elegance typical of Ferrari’s design language. The heated rear seats can be adjusted and reclined independently. When fully raked forwards, they significantly increase the Ferrari Purosangue’s luggage capacity.

Now best known as an elite ski destination, the town of Aspen has...
Gadgets

ScanWatch Horizon is the most advanced dive-style medical hybrid smartwatch, with...
Cars

Now best known as an elite ski destination, the town of Aspen has a rich and colorful history. Founded as a mining camp during the Colorado Silver Boom of the 1880s, it was reborn as a resort town in the 1950s. Gonzo journalist Hunter S. Thompson was a longtime...

The first all-terrain super sports car with V10 engine and all-wheel drive makes its debut at Miami Art Basel. Automobili Lamborghini presents the new Huracán Sterrato at Art Basel, Miami Beach: the first super sports car designed for maximum driving pleasure even away from the asphalt on loose or...